It is with deep sadness that we inform the BGRI community of the passing of our beloved Makida Mohammed, 49, of the Hulluko-Chakaso village, in the Munessa district in Arsi Zone, Ethiopia. Makida was a wheat farmer and an early and long-time BGRI collaborator. She represented Ethiopian wheat farmers at the 2012 BGRI Technical Workshop in Beijing, China.

On July 12, 2019, Makida travelled to Mecca in Saudi Arabia for a sacred Islamic pilgrimage. We heard she fell after throwing the ceremonial stones at the Kaaba, maybe because of the extraordinary overcrowding. She was hospitalized but did not recover and passed away on August 13. Muslims consider it a blessing to die at Mecca while performing their religious duties. Makida was buried at Mecca.

Makida was a strong, vibrant farmer who was quick to adopt new tools and technologies to improve production and the lives of her family and community.

Dr. Ronnie Coffman, vice-chair of the Borlaug Global Rust Initiative (BGRI), perhaps said it best: “Makida symbolizes the very type of farmer whose livelihood we aim to improve in the Borlaug Global Rust Initiative. By adopting improved, rust-resistant varieties of wheat, she reaped the rewards of greater food security and higher income. And because she shared subsequent generations of improved seed with other farmers in her community, people in her village and surrounding villages also prospered. She will be missed by her many friends in the BGRI community, and by the research and development teams who worked with her for more than 10 years.”

Makida was born in the Digelu-Tijo district in February 1970 to Mrs. Fitto Kentu and Mr. Mohammed Hedda. She attended elementary school (1-4th grade) at Aleltu village and could not continue her education because higher grades were not available in her village.

Makida married Mr. Milkesso Hamda in 1985 when she was 15 years of age. They had five children (two girls and three boys) and lived happily. Makida’s husband died in 2002 and Makida assumed the responsibility of raising her children as a single mother, refusing to re-marry, despite earnest requests. She turned to farming in Hulluko-Chakaso village as a way to provide for her children. Life was not easy for her with the low farm income she was earning.

In 2006, Makida heard about improved farm technologies through retired agricultural extension agent, Mr. Assefa Wolde-Michael, who contacted Dr. Bedada at the Kulumsa Agricultural Research Center for free provision of such technologies. Makida was eager to use improved crop varieties and appropriate agronomic practices to increase her production. Gradually she became a leading role model for other farmers in her village and beyond.

Makida started to adopt durable rust resistant wheat varieties in 2009, multiplying seed of improved varieties on small plots and disseminating seeds to other farmers. The durable wheat varieties Makida used included Digalu, Danda’a, Kakaba, Huluka, Shorima, Hidasie, Ogolcho, Wanie, and Lemmu. Makida and other farmers benefitted from the new varieties as wheat yields in her area increased from an average of 2 ton/ha or less to 4-5 ton/ha and as much as 10 ton/ha, and farm incomes gradually improved.

In 2011, Makida met a visiting Cornell DRRW team led by Prof. Coffman. A year later, the BGRI invited her to the 2012 BGRI Technical Workshop in Beijing to represent wheat farmers in Ethiopia. Along with wheat farmers from China and India, she emphatically reported her successes with the use of new varieties from the Durable Rust Resistance in Wheat (DRRW) project and other improved crop technologies. As many may remember, Makida was a star panelist who put smiles on faces of the large audience at that memorable “Farmers’ Discussion Forum.” 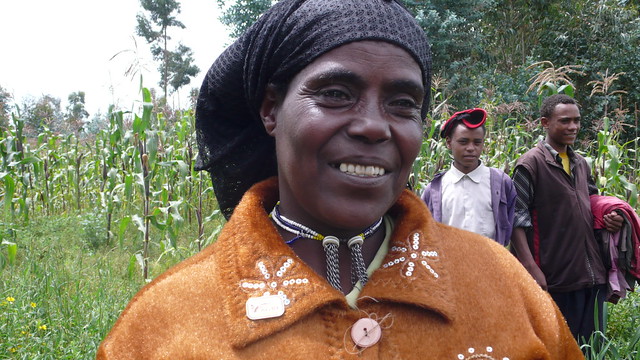 After her return from China, Makida shared her experiences with the village community and fellow wheat farmers; many hardly believed she had travelled to the very far country known as China, but Makida had pictures to prove that it was true. She continued to improve her family livelihood and built a bigger home in a nearby town.

In November 2012, Jeanie Borlaug and a DRRW Cornell team went to Addis Ababa, Ethiopia, for a meeting and then travelled over 300 km to visit Makida in her village. Makida had been asked to invite a few female farmers to meet Jeanie Borlaug and her group for a discussion. Surprisingly, over 100 farmers (one-third of whom were female farmers) arrived to greet the team outside Makida’s home. As this was just two months after the China BGRI meeting, the encounter was emotional and hugs among Makida and the guests were long and special, accompanied with tears and love. The discussion with farmers took over one hour and the farmers addressed the seven Americans guests as Chinese. Afterwards, the guests were invited to a traditional lunch at Makida’s home. The trip reminded Jeanie Borlaug of visits her father, Norman Borlaug, had with farmers in India, and is one she will never forget.

Makida is survived by her five adult children (Mustafa, Amane, Tamam, Bashir and Batta) plus an adopted son (Khalid) of 5 years, her mother Fitto Kentu, her identical twin sister Koresie, as well as her other sisters Amina, Fatie, and Mashmona, also her five brothers Husein, Abdurazak, Jawad, Adem and Osman. She is survived by seven grandchildren, by extended relatives and lifetime friends in her community who loved her dearly.